We all hope and pray that the twin tragedies of the Boeing Max 8 crashes which occurred recently in Indonesia and Ethiopia will not be repeated. It appears that the crashes were ironically caused by the malfunction of a system specifically designed to avoid crashes. When sensors detect that the airplane is climbing at too steep an angle and is about to stall, the pilot’s control console begins to shake, and an audible alarm is sounded. If the warning is not heeded, the plane will lose lift and fall out of the sky. Unfortunately, in the case of these two recent flights, the sensors and computer systems malfunctioned and sent the planes into fatal dives.

My Lenten flight this year seemed to be experiencing an unremarkable take-off. I got ashes smeared on my forehead on Ash Wednesday and felt appropriately, I thought, repentant. I enrolled in a mid-week Lenten Bible study at my church and diligently read the assigned scriptures, studied my lessons, and then engaged with my assigned group in meaningful discussion. I even attended Wednesday night suppers and worship in addition to Sunday morning services. I felt the promise of new life rising in me even as the sap started rising beneath the bark of the trees in my yard.

Then it happened. My stall warning system went off. My flight controls began to shake, and a computer-generated voice shouted in my ear, “Warning! Stall! Warning! Stall!” Well, not really; but my lack of enthusiasm and my sudden depressed attitude toward everything told me that something was going wrong. It didn’t help that I got the flu and the weather stayed dark and grey. Every day I checked the buds on the maple tree in my back yard only to notice that the slight swelling and pinkness that I had noticed several weeks ago had failed to advance. Even the buds had stalled. Alas! (I’ve included a picture as evidence.)

At the point of panic, I determined to regain control. My take-off angle had been too steep. My enthusiasm for the promise of new life which builds during Lent (and spring) had created in me a set of unrealistic expectations. Lent is a process. Lent is a journey. It mirrors Jesus’ journey to the cross; and that was no easy path to follow. It was slow and grueling. He stumbled and fell along the way. He experienced frustration, betrayal, and fear. I guess I can expect the same in my modest journey.

For me, correcting the stall means going back to basics. I resolve to continue my Lenten study including worship, Bible study and sharing soup suppers with my Lenten companions. I’ll go outside and take a walk even though the few robins in town appear surly and shivering under the bushes. Most of all I’ll try not to lose hope. I’ll keep this plane aloft, set a heading to the east and soar into the Easter sunrise.

But darn it; I wish the buds on my maple tree would pop! 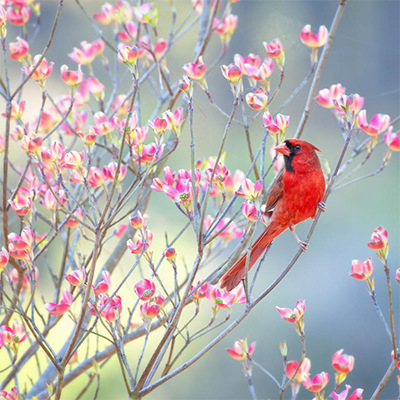 I took my first breath yesterday – of spring that is. As it happens almost every year, it took me by surprise. I was taking a walk on the Ice Age trail beside the still flooded Rock River and Wham! Not only did I experience the first breath of spring, it felt like the first breath of my life. That’s what spring is all about, the breathing of new life into creation. And after this hard winter, boy did I need it.

There is something subtle and wonderful in the air at this time of year that gives it that spring quality. It’s a combination of temperature, humidity, pollen content, and smells of damp earth that combine to provide that first-breath experience. Once that first spring breath enters our lungs, however, all of our senses are re-activated after winter slumber. Alongside the trail I noticed that the tips of the branches of the trees and bushes are swollen and pink. The wind felt strangely gentle on my cheek and the soil, rock hard a week ago, yields soft under my foot. The cardinal sings unnaturally loud and clear – Spring is here! Spring is here!

That first breath of spring presents each of us with opportunity. It opens us up to experience life anew. Our “spring housecleaning” can mean more than just going through the closet, cleaning out the basement, and putting the garage back in order. It can be a time to straighten out damaged or broken relationships. It can be a time to look at our work in a new way and commit ourselves to new goals and improvement. And not to be overlooked, being freed from winter confinement provides opportunity for exercise and the healthy renewal of our bodies and minds.

Whether or not you have inhaled spring and new life yet, it’s not too late to take advantage of the new life it brings. It’s not just that first breath that counts, there are many more to follow. To butcher an old saying, “This is the first breath of the rest of your life.” Breath deep. Enjoy it. Be made new.

Lent starts this week.  That’s really good news for those of us who are ready for winter to be over – and I imagine that’s just about everybody.  You can find the good news of winter’s imminent demise in the word Lent itself.  It comes from an old English word that means lengthen, in this case it means the days are beginning to lengthen.  Thank you, Jesus.

Most people know that Lent is the season that leads up to Easter; but there are a lot of special days and words associated with Lent that pass most of us by.  I’m going to do a series of posts in the coming days and weeks to talk about some of the special meanings of Lent that may help you appreciate it even more.  If nothing else, you can pull out some of these random nuggets of wisdom to impress your friends with how smart or religious you are.

Let’s start with Mardi Gras, or Fat Tuesday in English.  Mardi Gras technically is not a part of Lent which begins the next day on Ash Wednesday.  Although most of us associate Mardi Gras with the wild celebrations of New Orleans, it is a medieval celebration that originated in Europe and was brought to America by French colonizers.  It gets its name from the practice of pious Christians who gave up fat and rich foods for Lent starting on Ash Wednesday.  So, they used up their fat on the prior Tuesday in one final blow-out.  Especially in New Orleans, Mardi Gras is an excuse to parteeee.

For most of us the celebration of Mardi Gras is more subdued than it is in New Orleans.  Many churches and families have a tradition of serving special pancake meals, donuts, or other tasty foods on Fat Tuesday, whether or not they plan to make any sacrifices during Lent.  So eat up and enjoy yourself.  The lean days of Lent are coming.